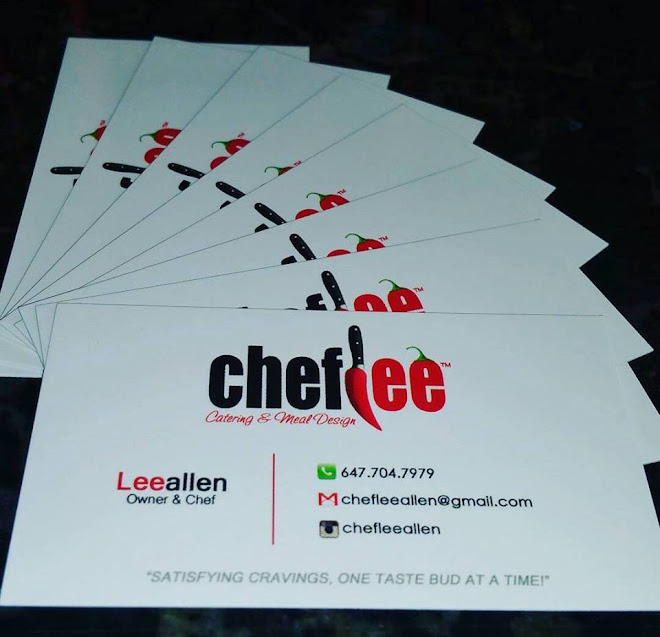 Legendary Rock & Roll Hall of Fame members, The Family Stone, take the stage to combine Soul, Rock, R&B, Psychedelic and Funk together with such hits as: “Dance To The Music”, “Stand!”, “Everyday People”, “I Want To Take You Higher” and “Hot Fun In The Summertime”.

Buy your tickets at Fallsview Casino Resort's Box Office (open Noon on show days), at all Ticketmaster locations, by calling Ticketmaster at 1-877-833-3110 or online at www.ticketmaster.ca.

Email ThisBlogThis!Share to TwitterShare to FacebookShare to Pinterest
Labels: The Family Stone at Niagara Fallsview Casino 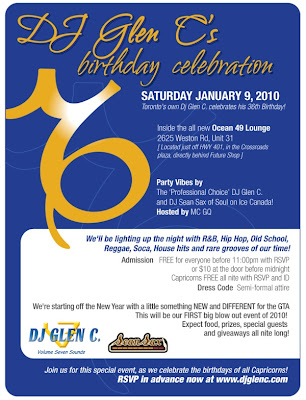 Posted by Carol Allen at 9:00 AM No comments:

The Total Wedding Show 2010 takes place January 2nd and 3rd 2010 at The International Centre (6900 Airport, Rd. Mississauga, ON)!
Visit: http://www.totalweddingshow.com/ for more info
Posted by Carol Allen at 7:53 AM No comments:

Email ThisBlogThis!Share to TwitterShare to FacebookShare to Pinterest
Labels: The Total Wedding Show, Wedding Shows in Toronto and Vicinity 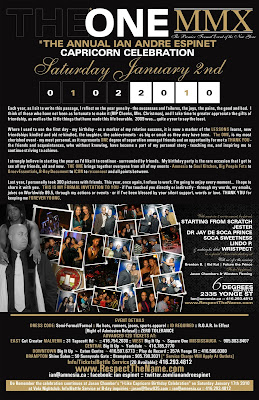 and hosted by friends from my past, present


The Premier Formal Event of the New Year.

Tickets on sale NOW.
Posted by Carol Allen at 11:01 PM No comments: 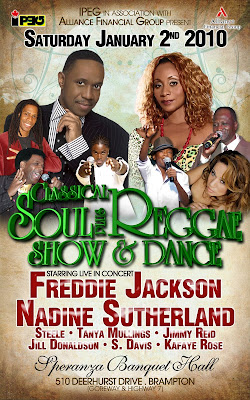 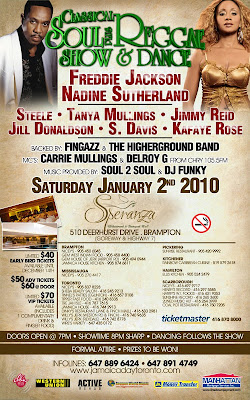 Backed by Fingazz & The Higherground Band

Visit: http://www.ticketmaster.ca for more info
Posted by Carol Allen at 9:42 PM No comments: 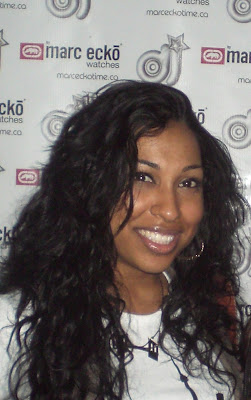 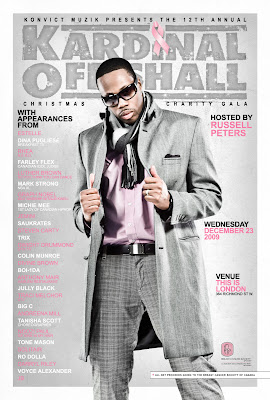 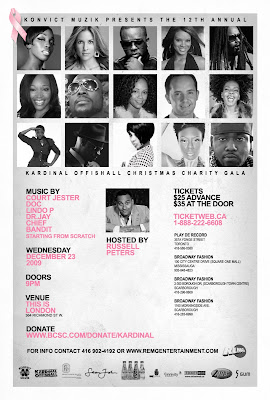 Kardinal is throwing his 12th Annual Kardinal Christmas Event. He has enlisted the services of his long-time friend, comedian Russell Peters to host.

In the spirit of Christmas and giving, all net proceeds will be donated to the Breast Cancer Society of Canada www.bcsc.ca/donate/kardinal

Visit: http://www.ticketweb.ca
Posted by Carol Allen at 10:16 PM No comments: 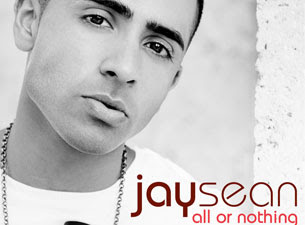 Email ThisBlogThis!Share to TwitterShare to FacebookShare to Pinterest
Labels: Jay Sean in Toronto

VIRTUOSITY: A Song and Dance Revue @ Bluma Appel Theatre, St Lawrence Centre for the Arts, Toronto, ON! - On Now until Jan 10! 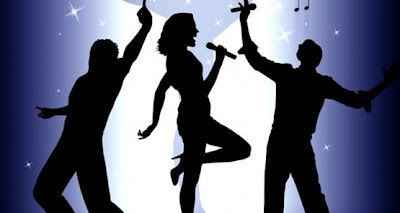 Created and starring the amazing, two-time Tony Award® nominee, Vivian Reed (Bubbling Brown Sugar, Showboat), VIRTUOSITY is celebrating its World Premiere in Toronto with a 6 week engagement! Called “a tour de force” by The New York Times and a “one woman five-alarm blaze” by Newsday, Vivian Reed is joined by six pheonomenal “triple-threat” performers including Destan Owens (Rent, Smokey Joe’s Café). The heart and soul of VIRTUOSITY lies in the assionate stories and emotions conveyed through song and dance. The cast, backed by a stellar band, perform both original and well-known material from the likes of Billie Holiday, the lsley Brothers, Smokey Robinson -and even Guiseppe Verdi - in this riveting two-hour event. VIRTUOSITY is sure to be an exciting,and glamourous event!

Visit: https://boxoffice.stlc.com/public/show_events_list.asp
Posted by Carol Allen at 9:46 PM No comments:

Friends, family and fans of the late Haydain Neale, frontman of the band Jacksoul, packed the Phoenix Concert Theatre in Downtown Toronto on Monday night for a powerful tribute concert in his honour. Neale, one of Canada's most talented artists, succumbed to lung cancer on November 22 after a seven-month battle. He had been in recovery from an accident back in August of 2007 in which he was knocked off of his scooter while in the east end of the city. His death came as quite a shock to many as many were not aware that he had developed lung cancer.

Neale's widow, Micheala and daughter Yasmin, who is currently attending university, were in attendance. Michaela, visibly grieving over her loss, read a prepared statement about her husband saying, "The subject he wrote about most often was love...Love is the guiding force in his daily life...Haydain loved people, he thrived on positive relationships with his family, his friends, business associates and anyone he met along the way. Haydain believed that if we all took a little more time to love each other, that strong foundation would see us through the tough times that we all experience."

All proceeds from the concert and sales of the album, SOULmate, which was released on December 1 and recorded before Neale's accident, will go to the Haydain Neale Family Trust.
Posted by Carol Allen at 11:01 AM No comments: 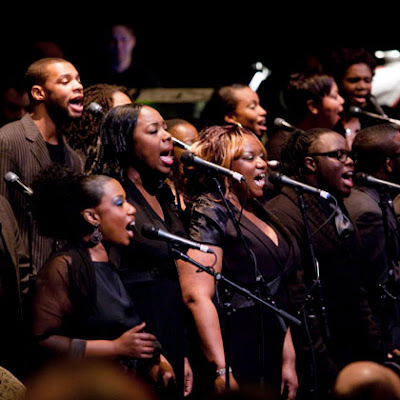 The Gospel Christmas Project began as a special concert created by Andrew Craig for CBC Radio in 2006, evolved into a CBC television special that won a New York Festivals International Television & Film Award and was nominated for a Gemini Award, and has since seen a performance at the National Arts Centre (2007), Massey Hall (2007), and two sold-out concerts at the Young Centre for the Performing Arts (2008).

Visit: http://www.youngcentre.ca
Posted by Carol Allen at 12:27 AM No comments: 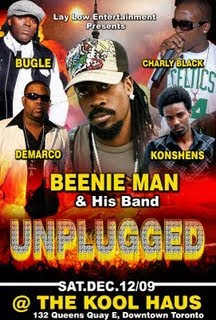 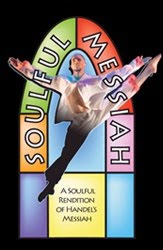 Soulful Messiah is a contemporary dance interpretation of Handel’s oratorio, The Messiah. This soulful rendition, infused with R&B, joyously blends Handel’s Messiah and the voices of legendary black singers, resulting in a cornucopia of tap, popular and African-Caribbean dance movements; a tour de force with undeniable holiday appeal.

Visit: http://www.balletcreole.org/
Posted by Carol Allen at 11:34 PM No comments: 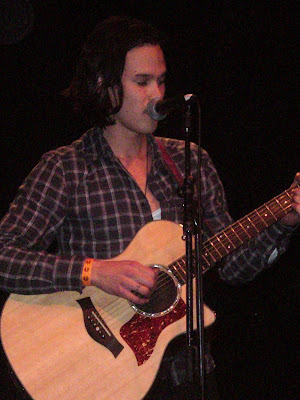 Email ThisBlogThis!Share to TwitterShare to FacebookShare to Pinterest
Labels: Justin Nozuka in Toronto

So You Think You Can Dance Canada @ Air Canada Centre, Toronto, ON - Thurs. Dec 10!

Visit: http://www.ticketmaster.ca
Posted by Carol Allen at 7:50 PM No comments:

The 4th Annual INSPIRE 2009 Aroni Awards was another sold-out affair. The event, held last Sunday evening inside the Arcadian Court in the city's downtown core, is one of Toronto's most prestigious awards ceremonies and silent auctions dedicated to empowering and support the youth.

In 2006, Toronto Promoter Mesfun Y. Haile and his family launched The Aroni Awards in memory of his brother Aron Y. Haile, an African Canadian who was tragically killed in an vehicular accident in his hometown, Eritrea (East Africa). At just 30 years old, he had become a role model and mentor in his community and at the time of his death, was on vacation from his position as a Software Developer for the Bank of Montreal. The event was created to inspire and reward young people for their outstanding community achievements.

Education Bursaries were presented to three students, Chante Barnwell, Aman Y. Sultan and Troy Knight for post-secondary schooling. Despite having challenges in their lives, they have perserved and continue to demonstrate excellence while pursuing their dreams.

The AronImage Awards were presented to:

Posted by Carol Allen at 3:05 PM No comments: